I received a letter from the VA telling me that I was approved and in the rating process. Then a month after that I received another letter from the board of appeals telling me that after reading the doctor’s report, I was denied. Now no one can even tell me the Dr's name? Something is not right here. I have witnesses to confirm the statements made by him were false, no one seems to care. Why is the VA being so obtuse about my case?
Posted by ernhrtfan at 5:17 PM No comments:

The tribute logo I made for Brian Zimmerman, the 41 yo father of 3 killed by lightning at Pocono. 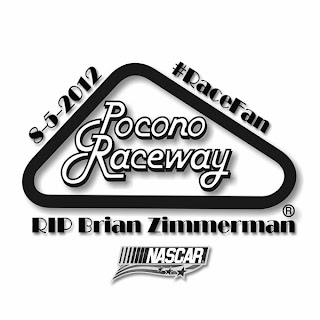 Posted by ernhrtfan at 6:43 PM No comments:


@DeptVetAffairs Just lie about it, or have your doctor do it and throw it out. That's what you did to mine after 8 years. --> Steps to Reduce VA Claims Backlog
Week of July 16, 2012.
The Department of Veterans Affairs processes more than a million disability compensation claims a year, for veterans of every age and era, whether they served in wartime or during periods of relative calm. Despite this, 558,000 claims are in "backlog" status. A new electronic claims processing system VA wide To address this issue.

Posted by ernhrtfan at 6:01 PM No comments:

Living one day at a time from my own personal prison, a quadriplegic body.


Need help! As some of you know by reading my bio on my website, I have had multiple sclerosis for quite a few years.

It started after a heat related injury while in the Marine Corps in the early ‘80s.
I wasn't officially diagnosed until 2004 because my MS would come and go, and I thought that I just wasn't feeling well from time to time.

The one constant I noticed was my intolerance to heat and cold. The heat zapped all of my energy, and the cold made me very stiff and made it hard to walk. The fatigue and the walking problems hit a peak in early 2004; it seemed that I just started feeling bad on a daily basis, and my friends kept saying, "You’re over 40, man."

My employer stated that I walked like an old man. That eventually led to me being fired from a job as a service technician that I had been working at for 10 years. I won Employee of the Year two years in a row before being fired.

My employer said that I acted like I didn't want to be there because I always wanted to sit down a lot. In the summer, the shop reached temperatures of 105 degrees, and I just didn't have the energy to keep going. I did fine in the morning, but would die in the afternoon.

After many trips to my private doctor, I was diagnosed with depression, and the medication stopped me from worrying about everything so much, but did nothing for my poor gate and stumbling. One day I tripped over an air hose and fell on my back, so my doctor decided to send me to a neurologist because I told her that my neck was stiff. An MRI showed I had a neck full of MS lesions.

After losing my job, I moved to eastern Oklahoma where a Marine buddy suggested that I go to the Veterans Affairs Medical Center to apply for health care because now I had none. I am glad he told me that because I didn't even know that I would be eligible for it.

That was a life saver since I was introduced to Dr. Smaranda Galis, a great neurologist in Oklahoma City. She understood my problem, and I told her my story and that I had had Bell's palsy six months after being discharged from the Marine Corps.

So I decided to apply for service related disability in 2004. Many of you know that is when the waiting began until I received a letter from Washington, D.C. Based on the report of another VA doctor, who came to my house after putting me off three times, I was denied service related disability. The reason for the denial was based on statements in the report from the doctor that interviewed me.

I had supposedly told him that heat did not bother me after my heat stroke in the Marine Corps and that I was able to perform my job without any problems after I was discharged from the Marine Corps. The only problem with his report is that it is a total fabrication.

My wife and daughter were here while I was being interviewed, and they heard everything I said. I stated over and over the problems I had and still have with heat and that my MS was relapsing and remitting of which the doctor apparently had no knowledge. I noticed during our visit that he didn't really know much about MS.

Is this common practice for the @DeptVetAffairs ?  This seems like workers’ compensation tactics against a quadriplegic veteran that did his job for our country, honorably.

The VA and the Department Of Defense must possess information that they're not sharing with the rest of us and certainly not with the new enlistees. I know the Sergeant isn't telling new recruits that they should look out for MS, as they do with AIDS or syphilis. If there is a chance that MS might be contracted or complicated by their time in military service, then why aren't enlistees told this? Would this complicate the recruitment process? Probably, but I have the sneaking suspicion that it would complicate something far more important to the modern Armed Forces: vaccinations. This is the one factor, aside from the traditional haircut, that all service folks have in common. If, as some believe, the causative agent is a mycoplasma, vaccinations could conceivably be the mode of transmission.
What bothers me most is that I'm sure the VA and the DOD have research that justifies granting this disability to thousands of veterans. If they have information that connects MS to military service, then we should all know what that information is. Multiple Sclerosis is a serious and growing disorder that afflicts millions of persons. To purposefully withhold information that would better our understanding of this disease is unjustified.
Posted by ernhrtfan at 5:09 PM No comments:

Nearing the end for me?

I was so proud 29 years ago when I became a U.S. Marine. Now that I am a quadriplegic from my service its amazing how they, the "@DeptVetAffairs" and "@DeptofDefense" just turn a blind eye and deaf ears to me?  I was told my condition was service related and approved until a V.A. Dr. Lied about my medical condition. "He will be sued"  The OKC V.A. even offered my daughter payment for taking care of me "Tax Free" we were told.  Now 4 years later we are told that she owes back taxes on that money? She gave up her career for me to keep me out of a nursing home, what a kick in the guts. What will become of us?....Would not claim #PTSD but over the 8 years my case has been in appeal,  the @DeptVetAffairs rating evaluation doctor and my @PVA1946 officer has made me sick with untruths and delays.
Posted by ernhrtfan at 12:07 PM 2 comments:

VA is killing me!

This was transferred from Okc VA to Muskogee, when this was started in Okc we were told "Three of us" it was non-taxable and was told nothing about it being monitored. Now Val, my daughter/caregiver  is in tax trouble, I had a doctor lie to the board of appeals about me, have my social security garnished for my meds and I proved my case years ago and even had a witness.

The Marine Corps caused and or exposed this illness, now I sit here, a bag of bones no therapy feeling like I've been put on hospice care and forgotten. Is this the end for me?

Now it looks like I'm going to have to sell everything I own/have left to hire an attorney to help us with this  mess.
Posted by ernhrtfan at 4:36 PM 3 comments:

ernhrtfan
Muskogee, OK, United States
I am 52 years old and catastrophically disabled by multiple sclerosis (secondary-progressive MS) that finally put me in a wheel chair in 2005.